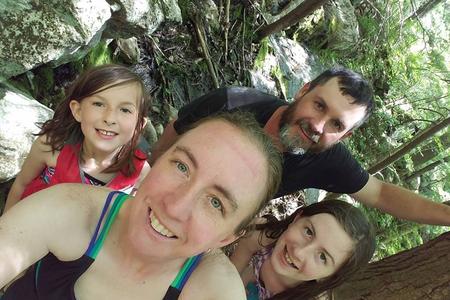 Kim grew up in eastern Massachusetts working at veterinary hospitals from the time she was 15  years old.  She has had animals all her life including: dogs, horses, cats, hamsters, rats, guineas pigs, gerbils, goats, pigs, chickens, ferrets and more!  Dogs have always been a huge part of her life, when she couldn't have a dog in the dorms in college, she got rats instead, until she could move off campus and have her own dog.  She is a former president of the Vizsla Club of Central New England (VCCNE).

Mike grew up in central Massachusetts with various dogs and cats as well.  He transferred to UMass after deciding that forestry sounded more interesting than engineering.  Mike is the former Vice President of the VCCNE.

Outside the Vizsla world Mike is a forester for Baystate Forestry Service, a division of Vegetation Control Service.  Mike spends many days out in the field, and sometimes the dogs get to join him for the day, which is great for them mentally and physically.

Kim is a Certified Veterinary Technician and after many years in specialty medicine spent 5 years teching anesthesia and surgery to future veterinary technician students at Becker College in Leicester, MA.  When it was clear Becker was going to close, she spent a year working remotely for Trupanion, the veterinary medical insurance company.  She starts a new job as a Veterinary and Animal Science Instructor at the Franklin County Techincal School in August of 2021. Kim is also working towards a Master of Science in Veterinary Forensics, which should be completed in the spring of 2022.

Their oldest daughter, Jaida, was born in July 2005 and Kalyn joined them in October of 2009.  Both girls love the dogs and Jaida is already helping to train and has entered a few hunt tests!

Vizslas were first known to Kim when she worked at a veterinary practice in high school,  When it came time for another dog to join the Barry household a Vizsla was high on the list!  After visiting  a Vizsla versatility event, they were hooked!  Cedar joined them soon after and the rest is history!